Posted in Church and State, Culture and Diversity, Faith and Church, Freedom, and Terrorism

This week (Daily Mail 7/3/2016) there is a report of the beheading of four teenage Christians in Iraq because of their refusal to convert to Islam. I am willing to concede that Islam may be, or may at least become, a religion of peace if it is stripped of and separated from any political or state power, but that is not the current situation. Alignment of church and state is always tragic, and Christianity also has suffered many shameful failings when established as the official religion and sanctioned by the state.

We are still trying to overcome the residual effects of the Emperor Theodosius’s A.D. 380 decision, expressed in the Edict of Thessalonica, to make Nicene Christianity the official religion of the Roman Empire. How much better it would have been had he simply expanded the concept of freedom of religion begun by Constantine sixty seven years earlier in the Edict of Milan. He should have stayed on “the right side of history” and left such theological decision making up to the Church. Had he done so, the infamous Crusades would have rightly been seen as struggles for religious freedom rather than as Christian vs. Muslim.

I suppose Mr. Ron Prosor, who explained the current persecution and extermination of Christians in the Middle East in an April 16, 2014, WSJ Editorial, must have no credibility and shares that problem with Canon Andrew White who reported the beheadings. I know of no other explanation for the failure of ABC, CBS, NBC, and CNN to report daily on this horrible activity. Such stories could displace at least the regular Kardashian reports.

Last evening Brian Williams chose to dedicate part of his precious twenty-two minutes to a bit of fluff about some new study which concluded that men are idiots and do stupid things. He missed a perfect opportunity to point to the current situation in the Middle East, including our role in it, as obvious proof of the hypothesis.

As the suffering and death go on, we can and must give thanks to God daily for the separation of church and state and freedom of religion we enjoy in the United States of America. Such freedom was not a sure thing and was not present in early settlements here. We can thank God for leadership of such as Roger Williams for avoidance of establishment of just another theocracy here in the “Land of the Free.” Let us exercise that freedom and defend it from every encroachment, even as we remember that is is “freedom of” and not “freedom from” religion that we are guaranteed.

As a reminder of early American history, here is a picture I took earlier this week of an explanation posted in The Museum of Charleston, Charleston, SC. 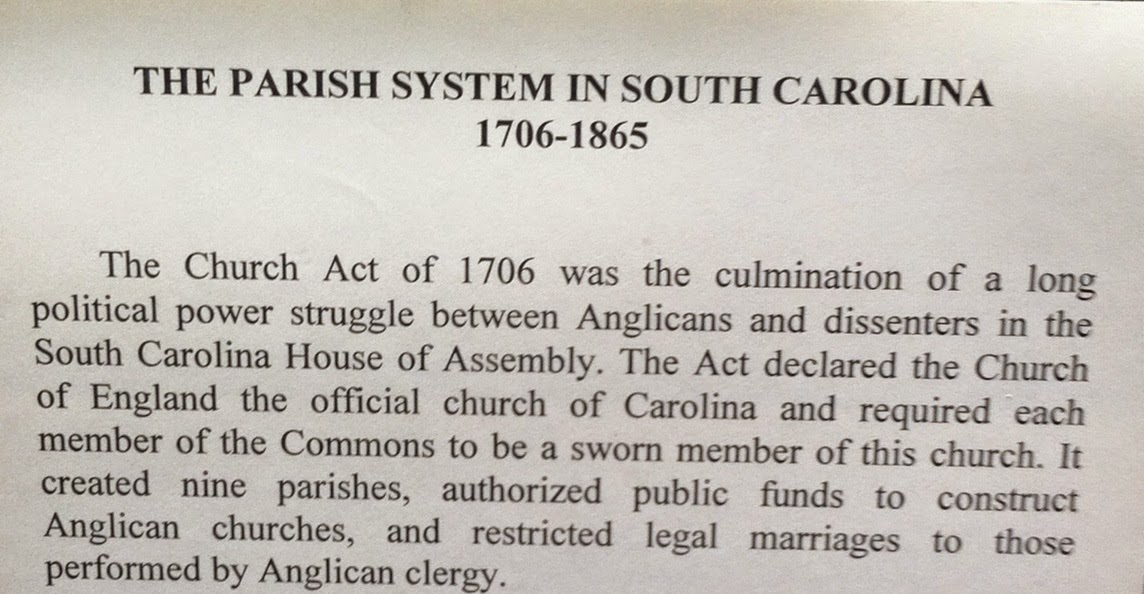