Labeling and Limiting Ourselves and Others

David Brooks is spending a lot of time thinking lately and coming up with some good points such as in the attached column. We are complex individuals and should never let ourselves be labeled, and certainly should never label, and thereby limit, ourselves, with any identity other than “Human.”

If we insist on describing ourselves, we could stick with adjectives rather than nouns. I, for example, can describe myself as fiscally conservative without going so far as to label myself A CONSERVATIVE, a term which means different things to different people, fits nobody perfectly, and serves only to divide.

I initially had some hope for a new group that keeps sending me emails. The name of the group is No Labels, but finally decided that is just another label.

Read the Brooks column. He is a professional writer, much better qualified than I, and is apparently alone among prominent writers in trying to change the national tone rather than playing to their normal audience, describing and exaggerating the differences. http://www.thestate.com/opinion/op-ed/article170766307.html

By the way, being fiscally conservative means I believe in paying the bills as we go along and making sure we have some reasonable level of future contingencies covered. It means I believe our government should find some reasonable sustainable balance between revenues, spending, and real GDP growth. Whether or not a particular combination will work in the long run is a matter of simple math. Over the past thirty years or so both big spenders and tax cutters have been winning and the nation, as a result, has been losing.

One big reason for that losing is that we have labeled ourselves and our politicians and candidates as LIBERALS or CONSERVATIVES and have demanded blind obedience to the expected behaviors. We need to loosen up, live, and learn from thirty years of data that show the current behaviors are not working.

There is one label that might work. Let’s all be THINKERS. That is a liberating label. If that idea is appealing, here is something to think about. 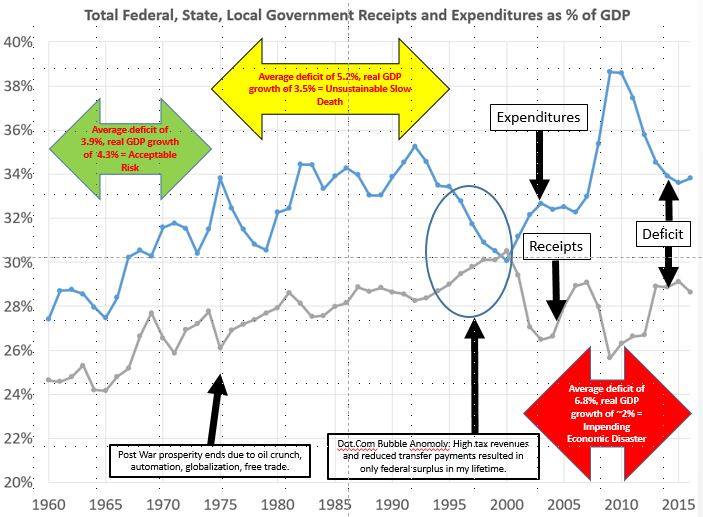