The Decade of Our Discontent 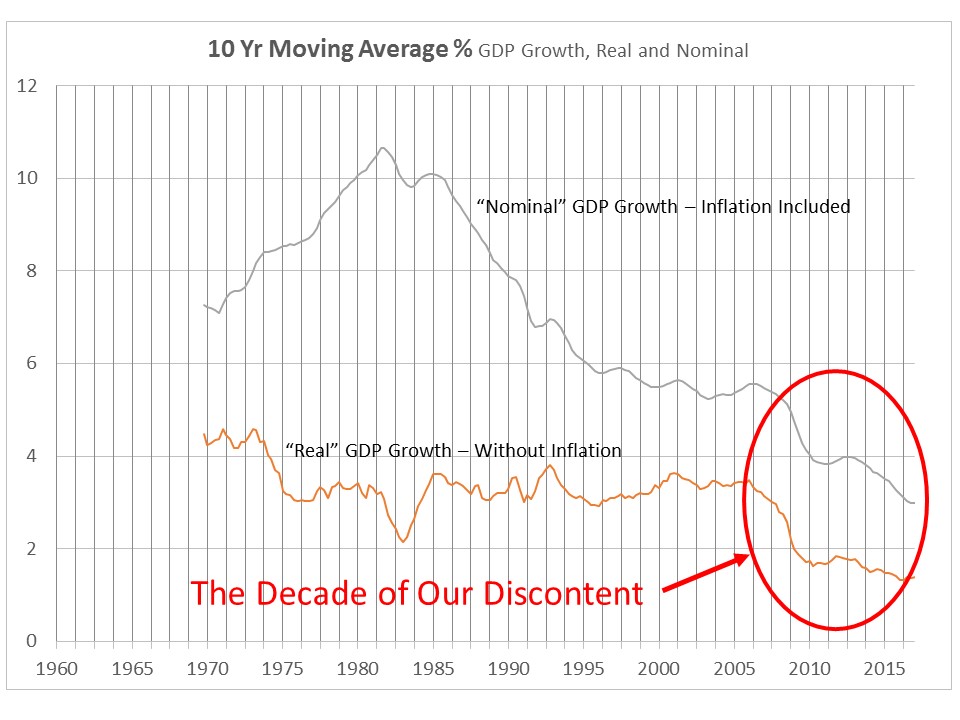 The announcement a few days ago of real % increase in GDP for the first quarter of only 0.7% suggested it might be time to remind people why we are so suffering so much fiscal discontent in the USA, so much discontent that we fired the old coaching staff and elected a new one.

Let me digress to explain why the term “coach” showed up. Of our four primary coaches at USC, Muschamp, Martin, Staley, and Holbrook, we have a national champion, a near champion, a gung-ho potential rising star with a great attitude, and a guy with a team that has two previous consecutive national championships and has just lost six straight SEC series and has sunk out of the top 25. Attitude matters, and team attitude is the primary responsibility of a head coach.

I realize nobody really cares about a wonkish subject such as GDP, but they do care about a diminishing workforce relative to the population, plant shutdowns, diminishing wages, and diminishing opportunity for people getting out of school and entering the workforce all in an environment of steadily climbing stock prices and CEO compensation. The overriding deal is that nobody wants their children hanging around the house and riding the family health plan several years into what used to be classified as adulthood and nobody wants to live out their retirement in relative poverty.

There are lots of excuses for our economic malaise. Automation, globalization, competition from developing nations, unfair trade practices, and poor corporate tax policies show up on all the lists. But here is the fundamental problem. Like the USC Baseball Team, we used to be Number One, we are declining, and we don’t like it. And we have developed a losing attitude, hunkering down and getting defensive.

We have plenty of money, but the problem is that it is all tied up in bank accounts of corporations and savers, people trying to figure out what Washington DC is doing to us and what their next moves should be.

There are two competing strategies for correcting the problem. One is to tax all that money away from the people and companies holding it and let the government figure out how to redistribute or spend it. The other is to change the attitude and get spending and investing on a strong uptrend. No doubt in my mind about which is the better strategy.

If the Trump presidency results in the attitude shift we need, we will begin to see these long term GDP trends reverse and begin a steady climb. If not, the next president will be given unprecedented power and will be in a position to greatly increase taxes and government spending and redistribution and make us more like Venezuela, all but a handful getting poorer together. Let’s hope for an attitude change. We have the power to fix the problem ourselves without depending on a savior president.

And, since President Trump’s style seems to be primarily that of a coach, maybe there is hope.

A couple of afterthoughts: