First Published in 2010 in Earlier Permanent Fixes Blog on Blogger.

In the fall of 1963, Sigma Chapter of Sigma Nu Fraternity at Vanderbilt University became the proud owner of a new color TV (21 Inch RCA I believe) which became the Sunday evening focal point for many of us as we watched the latest adventures of the Cartwright family on Bonanza. The price of the TV was about $700 as I recall, more than a month’s starting pay for most college graduates. In 2008, that same TV, according to US Bureau of Economic Affairs Audio and Video price index data, could have been bought for only about two hundred much less valuable 2008 dollars or maybe only a couple of days of starting pay for today’s college graduates. The only price index in the extensive BEA table that showed a bigger drop over that time period was for Information Processing Equipment (computers) which cost only 1% as much in 2008 as in 1970.

At the other end of the scale are Education (prices up 1400%), Health (prices up 870%), and Housing (prices up 553%). These are all well above the 461% average price index increase for all Personal Consumption Expenditures. These price indices do not reflect how much we spent. They reflect the prices of what we bought. So, in 1970, for example, we spent $9.2B on education, and, in 2008, we spent $210.5B on education. The 2008 total is 2288% of the 1970 total. So, the price increase was 1400% as indicated in the chart and table below, and the rest of the increase was due to getting more of it. (By the way, I don’t know how they calculate these indices and adjust for changes in features and quality, etc., but I am just taking them at face value.)

I don’t believe it is a coincidence that the biggest price increases have happened in the three areas with the greatest infusions of federal money. Pumping federal funds, especially borrowed federal funds, into any market will absolutely drive up prices in those markets. And the normal reaction of Congress as the prices rise is to pump in more money to compensate. It doesn’t work. Does anyone believe that education, for example, is better today than in 1970? Still, in spite of the huge increases in prices and spending over the last 38 years, most of the solutions proposed to our education ills today call for more spending.

Maybe some of these differences in inflation rates will disappear now that the government is helping us buy cars and appliances.

Data for the chart and table below come from the US Government BEA Tables 2.4.5 and 2.5.4. Click on them for a high-resolution view. 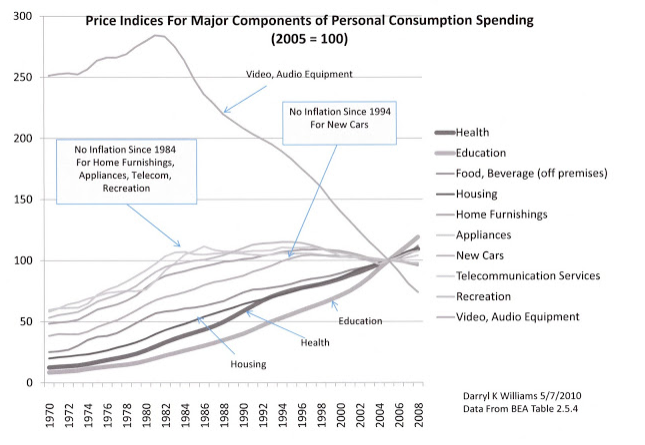 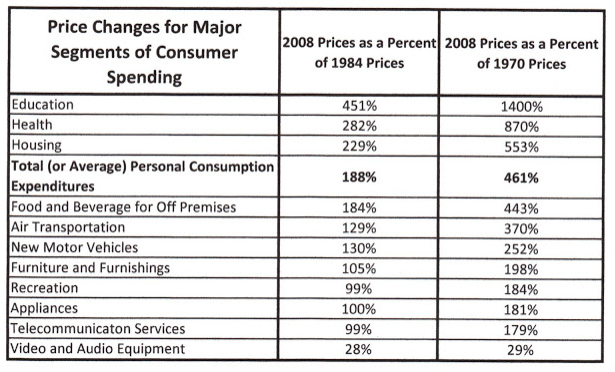 Then a few months later, this post followed the same theme.

The Key Club at Maryville High School in the late 1950’s was a service club with a goal of 100 service projects to be completed each year in order to be a candidate for awards at the Key Club International level. The pace had been established two years before my presidency by future Tennessee Governor and Senator, Lamar Alexander, and those of us who followed had no choice but to try to keep up the pace. It was a valuable leadership and management education experience. 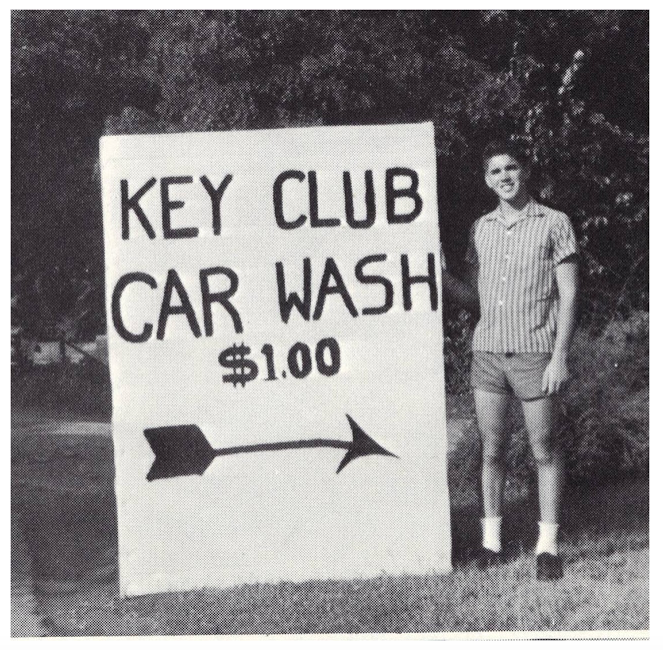 Yes, that is yours truly, holding the Key Club Car Wash sign, probably in the fall of 1959. Where are you going to get a good car wash for a dollar? And I think you can tell from the quality of that sign that we took the task seriously and were determined to do a super job. The local bus line owner had loaned us the high-pressure spray machine and detergent he used to keep the buses clean. As I recall, the sign was painted on some cardboard from a refrigerator carton and had a wooden frame to keep it rigid and upright.

It is always interesting to see documentation like this of past prices. I don’t have the documentation, but, as I recall, tuition at Vanderbilt University where I enrolled a few months later was $450 per semester with total annual cost for tuition, books, room, and board around $2,000/yr. Now, in 2010, the total is about $57,000 a year (~$67,000 in 2018). Well, that seems to have gone up a lot more than car washes, doesn’t it, because you can still get a pretty good car wash for less than $10?

The change in the Consumer Price Index  from 1959 to 2010 predicts prices 7.3 times as high now as then which would put student car washes at about $7.30, probably pretty close to reality, or Vandy costs at about $14,500/yr., a long way from $57,000. Something has clearly gone out of whack on the cost of higher education, and I bet it has something to do with tax money being pumped in for loans and grants and scholarships. I’ve blogged on this earlier, putting forth the quite reasonable opinion that money pumped in to a business by anybody other than the purchasers of the output artificially drives up prices. It’s happened in dramatic fashion in higher education, housing, and health care. We would have been better off if Congress had decided to subsidize car washes. We’d be paying $30 to get a bunch of kids to wash the car but would be able to send our grandkids to spend a year at Vandy for less than $15,000.