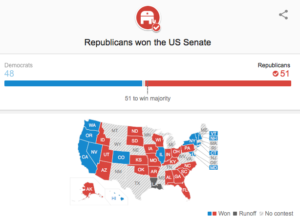 Reading all the doomsday rhetoric on the web today about our president elect gives me hope that we all can unite now in demanding that the Congress step up and fulfill its responsibilities. During the Obama administration Congress has essentially been a roadblock, failing to work together and propose real solutions to serious problems and, instead, voting without reading for proposed legislation from the Executive Branch or simply abdicating responsibility to executive actions. The right sat on their hands shouting no, and the left complained and cheered and bowed to the will of the POTUS.

Now, let us be sure that citizens of all political persuasions join in pressuring Congress to quit campaigning and fund raising and get to work. And let the right avoid temptation to cheer the POTUS, a temptation to which the left enthusiastically succumbed. The POTUS is not a king and is not a ruler but a cog in the wheel, part of a system of checks and balances that we must preserve. The POTUS should be mostly ignored except for his or her role in the complex system of government which protects us from tyranny. Let’s demand weekly press conferences from the congressional leaders and let them feel some heat.

Let’s get the House and Senate to switch from seating the parties on opposite sides to a D/R/D/R/D/R seating arrangement. Let’s mandate a joint Happy Hour at 5pm every day Congress is in session. Maybe that would help them get acquainted and agree that they do not pledge allegiance to a president or to a political party or to some fool promising to kill their re-election chances if they raise taxes, or to climate alarmists or to the NRA or to various minority groups but only to the United States of America. And the only ideas to which they pledge allegiance are those in our founding documents, primarily based on the rights to life, liberty, and pursuit of happiness.

The only tragedy now will be if we end up with a Republican Congress ignoring the Democrats and rubber stamping silly legislation coming from the Executive Branch while the Democrats moan and groan and plan the next election which, in that case, they would easily win.

Can we kill party line voting and get a veto proof bipartisan majority in Congress focused on the issues and willing to compromise? Can we get a shift away from executive power to Congressional Power? Can we get senators and representatives focused on their national responsibilities instead of re-election? We have gone way too far in the opposite directions.

Maybe now there is hope for a Congress humble enough and strong enough and courageous enough to significantly reduce their own power through significant reform and simplification of the tax code, stimulation private investment, and debt reduction as a percent of GDP? Those would never have happened if Secretary Clinton had been elected but maybe there is a possibility now that both sides can understand the problem with too much presidential power.

Republicans, it is now in your hands to take the lead in building that veto-proof bipartisan majority. Step up to the opportunity and responsibility or get ready to lose the next round of elections.