In the 1800’s, Commodore Cornelius Vanderbilt, with little government oversight or involvement, spent his life building transportation and financial infrastructure that made him possibly the richest man in America and enabled an accelerated rate of economic development, created hundreds of thousands of jobs, boosted living standards, and made travel widely available, all through reduced freight and passenger prices on his steamboats and railroads. (More on this here.)

In the 1950’s, US President Dwight D. Eisenhower initiated construction of the US Interstate Highway System at Federal Government expense of somewhere around $500B in 2018 dollars. The Federal Aid Highway Act was signed in 1956, and it was almost 40 years later that the system was considered complete. The resulting easier, faster, and cheaper transport of goods and people enabled significant cost reductions and productivity increases. (Read more here.)

The Commodore’s investments didn’t help me much since I was born well into the next century, but that Interstate Highway System was a big boost. When I entered Vanderbilt University in the fall of 1960, it was a six hour drive on mostly two-lane roads, shared with freight-hauling eighteen wheelers, through a series of small towns, to get from Maryville, TN, to Nashville, TN. There were Alcoa, Knoxville, Kingston, Rockwood, Ozone, Crab Orchard, Crossville, Sparta, Smithville, Dowell Town, Liberty, Alexandria, Watertown, Lebanon, and then, finally, Nashville. Now, on Interstate 40, it is 185 miles and about 3.5 hours with no traffic lights or stop signs. (We took that longer two-lane drive for my 50th reunion in 2014 and found it to be very pleasant and scenic with most of the traffic and all the trucks on the nearby Interstate.)

Now President Trump wants to kick off a new infrastructure project and spend a trillion dollars, about twice the cost of the Interstate Highway system. He plans to fund the projects with tax credits and public-private partnerships. I know it is hard to know what anybody is really thinking in Washington, but according to one article, he actually proposes spending $20B per year for the next ten years and hopes that will inspire states and cities to spend an additional $800B in the following years. Read more about it here: Hope is a wonderful thing.

About a year ago leading Democrats rolled out a ten year trillion dollar infrastructure plan to be funded by federal spending,  but we haven’t heard much about it lately. It looks like the stage is set for a big fight against President Trump’s rather modest and not very helpful proposal. I just hope that if something is approved, it does not degenerate into a bunch of smelly pork barrel projects. Hope again!

Way back in 2014, President Obama proposed a $478B infrastructure bill paid for with increased corporate tax revenues, but the Senate was having nothing to do with that. Everybody wants infrastructure, but nobody wants to pay for it.

Why do we hear so much talk and see no action? The problem is that we can’t afford a truly transformational investment in infrastructure. We are already $20.6T in debt, not even counting the unfunded liabilities, and are continuing to borrow about $700B per year just to keep things running.

So, why could we afford such expenditures in the 1950’s and 1960’s and not today? The table below of data from the BEA NIPA website is my attempt to explain the problem. We have been overspending for 40 years, building a debt greater than annual GDP,  and have overcommitted transfer payments for Social Security and Medicare which are driving out discretionary spending. Yes, taxes could be increased dramatically to cover the cost, possibly resulting in a severe economic downturn, but apparently the citizens won’t stand for that. Of course it would be fine if somebody else paid the increased taxes but not I and not we (my demographic)! (Spell check keeps wanting me to change that “I” and “we” to me and us, but I believe I am correct.)

The red lines in the chart are the big problems, and the yellow lines are the symptoms. I know it is complicated and can’t be read on a phone. So, if you don’t have time to digest the chart, here it is in a nutshell: Social benefit transfer payments were only 5% of GDP in 1960 and are now 15% of GDP. And, it’s not on this chart, but debt as a percent of GDP was about half what it is now and GDP growth in the sixties was about twice what it is now. Those are very significant differences. We were so wealthy that only five years after the Highway project was announced, President Kennedy was able to announce on May 25th, 1961, plans to put a man on the moon before the end of the decade! It cost about $175B in today’s dollars and was accomplished in 1969.

One thing I am confident of is that if we were smart enough and wealthy enough to efficiently and effectively bring our infrastructure to world class standards (without that pork barrel problem becoming dominant), the economic benefits would be huuge! Wealthy people and companies from around the world would flock here to live and invest, and the need for welfare transfer payments would decrease significantly (even though we would probably increase them.)

Hey, that’s an idea. Why don’t we borrow from the Social Security Trust Fund to pay for a big infrastructure project? What? There is nothing there? It has already been borrowed and spent? Oh well. Back to the drawing board.

Here are the data, straight from the Bureau of Economic Analysis. 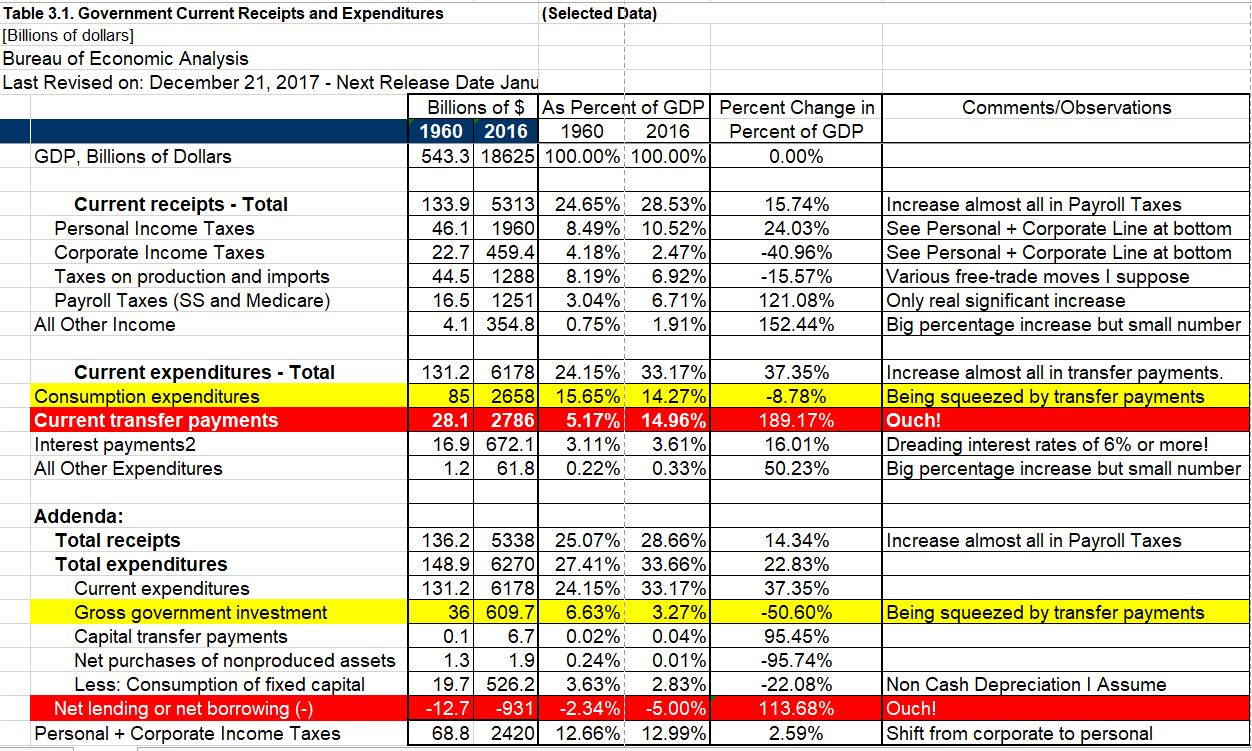 All this reminds me of a much smaller federally funded infrastructure project from the 1930’s.