The “Repeal and Replace” mantra has become a joke since we have not seen any reasonable, easily understood, proposal for the replacement, let alone any means for transitioning to it from the current mess. Now that we apparently will have a “Republican” president and Congress and repeal is likely, someone best get to work designing the replacement. Is Jonathan Gruber available?

Here is my suggestion, modified a few times over the past few years, for a simple way to give all US Citizens access to insured health care through either Medicare, Medicaid, or private health insurance. Just pass some simple legislation of a half dozen or so pages, something like this:

The above regulations may seem excessively intrusive but are modest compared to the open ended federal options built into the ACA.

Such legislation would create true competitive nationwide health care provider and health insurance company scrambles to streamline and reduce the cost of care and to design policies and establish premiums to attract policy holders. The IRS would not be involved.

It would make insured care available to all, though individuals would, of course, still have to make choices about whether to buy health care insurance or spend the money on vacations, electronic toys, new cars, booze and cigarettes, but that would be just fine. Of course many would still choose not to buy insurance until and unless they become sick, but that too would be OK. They would risk having to pay their own bills while they go through the process of buying insurance and experience a likely waiting period before full coverage kicks in, and, if they are in the income range to receive federal subsidies, the taxpayers would save some money during the time they take that risk. Such risk takers may go bankrupt, and that would be fine also. If their income gets low enough, they can get Medicaid.

I expect that such a program would be so successful, that it would eventually replace Medicare, putting those of us over 65 in the same program as our younger fellow citizens.  Health care spending would no longer add to the federal deficits and debt. And spending on health care in the US would decline as a percent of GDP.

And, most importantly, Individual freedom, personal responsibility, and free market competition in the health care industry would be preserved. And the regulators would be very busy making sure all the items above are being obeyed.

Finally, design of a smooth transition from the convoluted mess we have to the freedom and simplicity desired will require greater minds than mine. I’m guessing it might require a transition period of three years or so during which the ACA would continue and providers and insurers would design and test the new systems, perhaps in limited markets. And, there is the simple fact that the “Republicans” may find it as difficult to “Repeal and Replace” the ACA as President Obama found it to close Gitmo. Campaign promises are like that. 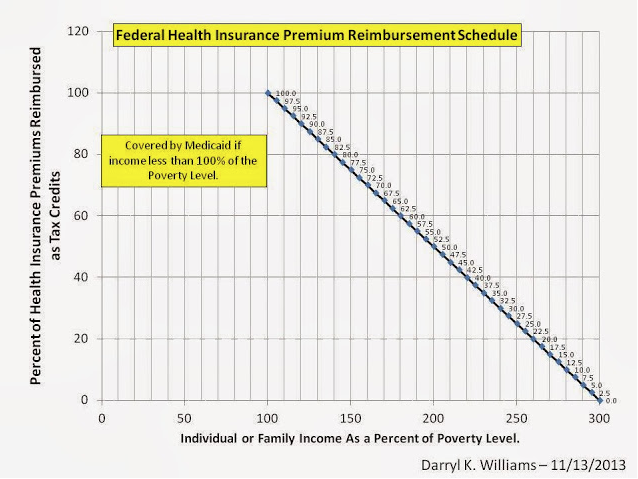 Note: I don’t have enough information to do the math on exactly what would be reasonable for the reimbursement schedule in the chart above and what the impact on tax payers with larger incomes would be. If such a plan as this were put forward, there would be much number crunching going on by policy wonks and the Congressional Budget Office and some reasonable level would be agreed on. I bet it wouldn’t be too much different from what I am proposing.