We are in serious need of another hurricane threat or sex scandal or other news-dominating event to get the media folks to quit talking about all the terrible things that are going to happen if we go off some fictional fiscal cliff. Otherwise, we are stuck with that broken record until January 1. Even infamously conservative Fox News seems to be homed in on the FISCAL CLIFF, describing it in tones and language that should be reserved for imminent global warfare or an engagement announcement by Justin Bieber and Lindsay Lohan, whoever they are.

The president says he just wants rich folks to pay what they paid during the prosperous Clinton administration years but wants everything else, federal spending included, to be like it is in the depressed Obama administration years. The president’s position that everything is on the table but that he won’t accept anything less than a return to the Clinton era tax rates on “rich” people is ridiculously self-contradictory nonsense.

The Republicans don’t get a pass on this. The only reason we have this media fodder/frenzy is that ten years ago the Republicans rammed through major tax reform, all the provisions of which were set to expire in ten years. That is idiocy.

The problem with the president’s focus now is that reversion to the higher tax rates on the “rich” isn’t going to hurt anything or help anything or, in the absence of other badly needed changes, even address the major issues. The “rich” will adjust their investments and investment strategies and make other tax-law-motivated, financially astute changes and will end up paying a little more, and the deficit will continue unabated, and the debt will continue its relentless climb on the way to twice the GDP. The class warfare campaign against the “rich” is no more than an effort to deflect attention from and avoid badly needed action on fundamental tax reform and spending because such action would transfer power from the government back to the citizens.

I strongly favor the “rich” paying more and am personally willing to pay more but think it should be obvious to anyone who works for a living that doing so with lower marginal rates on additional future earnings combined with dramatically fewer deductions, exemptions, exclusions, and credits would provide greater incentive to produce, invest, and earn more, contributing more to GDP in the process. Some like to point to an individual they know who is “rich” and disagrees with this or would not react in such a way, but the overall effect is a macro effect, not a micro effect. It is a simple and irrefutable truth that lower marginal rates motivate investment and higher marginal rates discourage investment.

I’m not advocating extremes in either direction, but check out the story on the impact on China’s economy when Deng Xiaoping cut the marginal tax rate on farmers to zero. The macro impact on changing from a system of taking everything a farmer produced above a certain level to allowing the farmer to keep everything produced above a certain level was impressive. I’m not advocating such an extreme, but surely nobody can doubt there will be a dampening macro impact of marginal tax rates, federal, state, and local combined, in excess of 50%.

It would make more sense to allow the truly rich, the super achievers and job-generating investors, the billionaires, to opt for a flat annual fee of $50M or so and let them invest everything above that. One can only spend so much on houses, cars, jets, yachts, caviar, diamonds, and furs. The rest of it, rather than being hidden from the tax collector in weirdly constructed off-shore accounts would go to US investments in business and industry with reasonable chances of success and would create jobs and opportunity throughout the economy. And that is what we need. And I bet the $50M flat fee would be more than any billionaires are now paying because their financial arrangements are set to minimize taxes under the current radically complex tax code. It would be seven times what Warren Buffett paid last year and would eliminate the need for him to defer or avoid personal income on his $50B in investments. 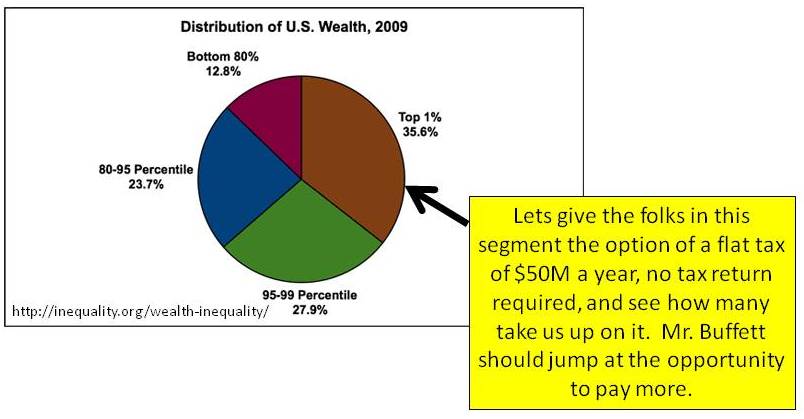 Unless the president shows willingness to shut down his vote-generating class warfare, stoked with emotional appeals to his numerous but narrow constituencies, and address these serious national issues, I cast my vote for the Thelma and Louise approach of going off the cliff. I predict the landing will be much softer than expected and will be good for the country in the long run. If we are truly lucky, the administration and the congress will then have nothing left to do but deal with the serious long-term issues.