A much higher degree of socialism than we have in The United States works well under certain circumstances. It seems to have worked among at least one small group of Christians in the early church, for example (Acts 2:41-47), though lying about one’s resources was clearly not acceptable (Acts 5:1-10). A couple of years ago we were in Austria during the Christmas season, and it seemed to me that democratic socialism is working very well there. What a great place to be at Christmas! It is a no-holds-barred all-out celebration of the birth of Jesus with total immersion in Christmas decorations, food, music, and joy with lots of gluwein to drink.

“Socialism” covers a wide range of government activities and governing systems. You can read about one of the extremes, North Korea, in the November 2, 2009, New Yorker Magazine. The Good Cook is the story of Song Hee-suk who escaped from North Korea where government controls everything for the good, or bad, of the group and even food and housing are strictly rationed. At the other extreme, some ultra conservatives would argue that the highways and national parks in the United States are examples of socialism. So, I just want to make it clear that I am not saying that Austria is an example of socialism and the United States is not. I am just saying that they are more socialistic than we.

The United States and Austria are quite different and face very different challenges. I don’t believe, for example, that Austria takes any pride in diversity or worries much about political correctness or struggles with illegal immigration issues. Austria is 74% Catholic and less than 5% Protestant today at least partly because the Lutherans were driven out in the 1700’s and moved to Georgia in the United States where they founded Wachovia Bank. We did see a very few beggars in Austria, but our leader made it clear that they were “gypsies” and not Austrians and that we were not to give them anything or buy anything from them. With land area less than 1% of the United States (same size as South Carolina) and a homogeneous population less than 3% of the United States (about same as Virginia), suggestions that solutions or systems that work well in Austria would work in The United States seem naive or foolish.

According to our tour leader, Austrian education and health care and pensions are fully paid for by a high and progressive income tax and there are generous guaranteed family leave policies for both men and women. On the other hand, I got the distinct impression that there are very high expectations for Austrian citizens to take full advantage of education opportunities appropriate to their capabilities and interests and to be gainfully employed and contributing to the common good by paying those high taxes. So, while Austrians may have a strong sense of entitlement to the benefits of being Austrian, they also seem to have a strong sense of obligation to contribute and very high expectations that everybody else will contribute as well. Peer pressure can bring about pretty good results as I can attest from having lived in Japan for three and a half years. It seems to me that in the United States we have the sense of entitlement down pat but are weaker on the obligation and expectation dimensions. As a matter of fact, I think we often disrespect and discourage and diminish each other with low expectations.

Focusing on the good of the group in total is much easier and more likely to occur in small countries such as Austria while individualism clearly flourishes in large diverse populations spread over extensive geography. I think in the United States individualism drives our volunteerism and charitable giving which may be less common in a country like Austria. We want to help those less fortunate, but we just don’t trust the government to handle all that. We want to be personally involved. Individualism also drives our entrepreneurial activity and creativity in the business world, and that has created a large portion of the well-paying jobs we have.

Here is a summary of pertinent comparisons between The United States and Austria. Much more is available at the CIA World Factbook Website. Good food for thought and very helpful for problem understanding and diagnosis. 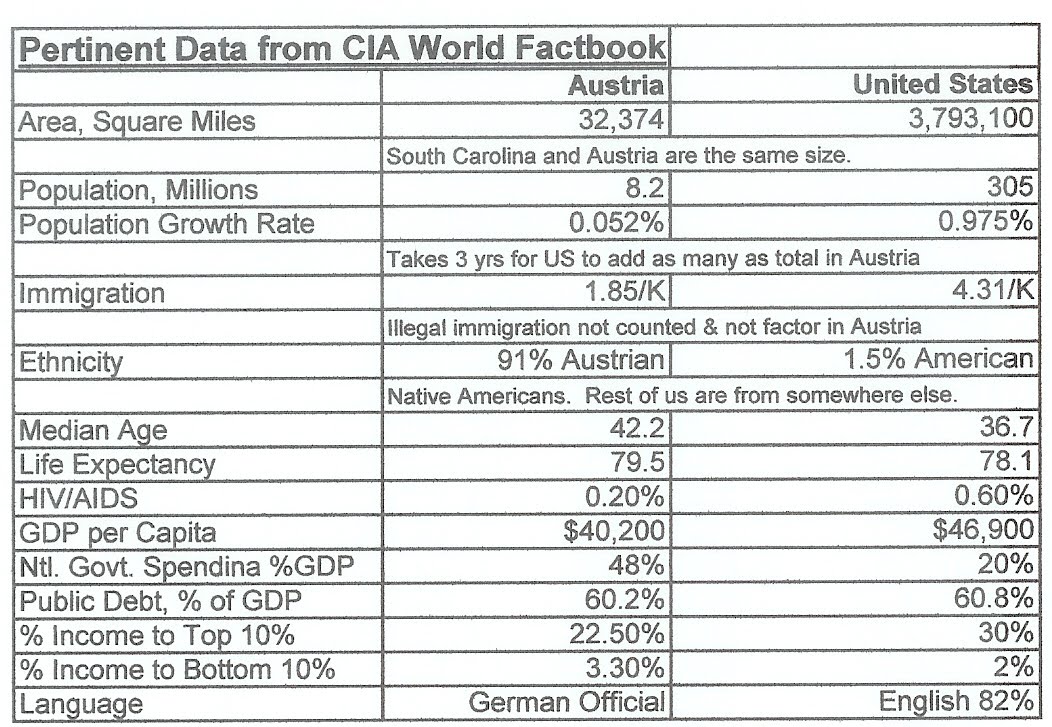 I hope I haven’t expressed any serious misconceptions based on my admittedly very limited exposure to Austria. If I have, I hope some Austrians will accept my apology and point out my errors. I’m sure Austrians probably do not consider their country to be “socialist” though they are certainly more so than the USA.