When I began employment at Eastman Chemical Company in 1965, the Social Security wage cap was $4,800, the rate was 3.625% for employee and employer, and my starting salary as a chemical engineer was $770/month. That meant that my annual Social Security tax of $174, 1.9% of a year’s pay, was paid up in early July. Teasing out from fellow employees information about when their Social Security was paid up was a lightly camouflaged means of figuring out who had the highest salary.

That “wage cap” on Social Security taxes has been increased 29 times since the tax was first established in 1935. And now President Obama has suggested raising it a 30th time as a solution to the Social Security funding problem. Here is what he said: “If we just made a little bit of an adjustment in terms of the cap on Social Security, that would do a significant amount to stabilize the system.”

I expect wage cap increases to continue on a regular basis, but such a proposal can hardly be categorized as an innovative or aggressive approach to the long term Social Security funding problem which is not really a Social Security problem but a government spending problem. The fact is that Social Security taxes have far exceeded Social Security benefit payouts over the decades and the excess has supposedly been invested in a “Social Security Trust Fund.”  Unfortunately, that trust fund, currently about $2.6T, consists only of US Government Bonds because all the cash was borrowed by the federal government and spent.

Of course this is why some of our more liberal senators and representatives and lots of folks nearing retirement argue, quite reasonably, that Social Security is sound and needs no adjustments. So long as the federal government honors the bonds in the Social Security Trust Fund and redeems them as necessary in order to pay promised benefits, there is no problem for a few decades to come. Unfortunately, redemption of those bonds will require tax increases or spending cuts in other areas because we are now at the point that Social Security taxes no longer exceed the benefits and are no longer available to fund other government spending. And the gap between Social Security taxes and benefits will expand exponentially as the ratio of retired folks to working folks continues to increase.

If only that trust fund money, instead of being spent, had been invested in private accounts or in bank CD’s or corporate bonds or foreign bonds or equities or just stuffed in a government mattress somewhere, anywhere but in US Government bonds. At least there would be something there. Oh, well.

This government website does a pretty good job of explaining the problem, but there is some “government speak.” Here is a good example, in the words of the Social Security Administration:

This chart, a 45-year history of Social Security and Self Employment Taxes and the benefits paid from them, illustrates the issues raised in this posting. 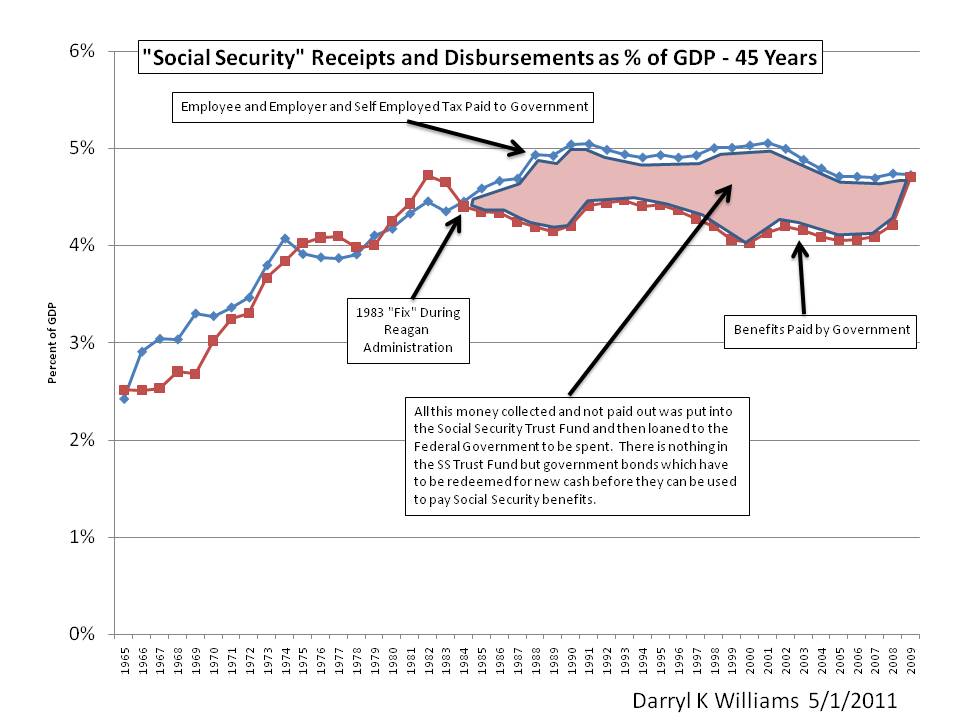