My grandparents, Oscar and Ezalee, Hobart and Bessie, were born in 1895, 1895, 1897, and 1898 respectively. Their children, three sisters in the first case and a brother and sister in the second, were born in the 1920’s. So, when The Great Depression arrived, both East Tennessee families were suddenly faced with earning livings and raising young families in a punishing economy with little opportunity.

Granddaddy Oscar had been appointed a rural mail carrier in 1927 by US Representative B. Carroll Reece, Republican from Butler, TN. Postal jobs were political in those days. His salary was $157.50 per month, and he carried the mail on horseback, seven to eight hours per day, until switching to a Chevrolet in 1933. I bet he had callouses on his butt. Granny Ezalee was a talented teacher, seamstress, gardener, and cook, well trained by her mother, Grandma Marshall, whom I barely remember. I bet Granny made a lot of clothes, canned a lot of beans and tomatoes, and scalded and plucked a lot of chickens for those three girls. They were poor, certainly by today’s standards, but I doubt they knew it, worried about it, or suffered very much.

Granddaddy Hobart was a flour mill owner/operator and horse trader who rode around Blount County, TN, trading horses and campaigning against “Old Roosevelt.”  He thought the easy money being spread around and government social programs were going to lead to trouble down the road and that the country would be better off in the long run if Alf Landon or Wendell Willkie were in office. He was a good businessman, and I think his family, also poor by today’s standards, got along OK. One piece of advice he gave me based on his experience: “Sonny Boy, don’t ever let anybody tell you the price of land doesn’t go down. I’ve seen it go down.” Grandmother Bessie was farm raised, locally, and could hold her own in the garden and the kitchen with anybody.

I’m thinking about these folks and the problems they faced because of the FDR special running on TV this week. The impression I come away with is that Roosevelt was a great and unselfish leader, fully aware that his job was to put away and hide any personal problems, polio included, slap a big smile on his face, and persuade the American people that the USA was a great country and the people were doing a great job and everything was going to be OK. Those intimate “fireside chats” were pure genius made possible only by the recently widespread radio technology. I think President Reagan had the same strengths and succeeded as a popular president for the same reasons, though in very different situations, both leaders always talking about the national good and using collective pronouns rather than the first person singular in their speeches.

In an era that valued and had high demand for manual labor, FDR was able to create meaningful real jobs, planting trees and building everything from dams and tunnels to outhouses including a new “little brown shack out back,” built by the WPA and later painted red, for Oscar and Ezalee. That kind of jobs program would be much more difficult today because of the dramatic reduction in demands for untrained manual labor and our history of providing government checks for doing nothing.

FDR’s suppressed ego finally got the best of him during his second term and inspired him to seek approval to pack the Supreme Court by adding a new Justice for any who didn’t voluntarily retire by a certain age. After that, even his own party failed to support him. Had he been successful, it would have been the end of our democratic republic and the birth of a dictatorship.

FDR was rescued from the Supreme Court fiasco by the Nazi challenge which he recognized early and opposed effectively with little support from either Democrats or Republicans. The American people, remembering WWI and struggling with the economy, were completely uninterested in getting involved in a war in Europe, similar to public interest today in nipping ISIS in the bud. But economic issues took a back seat and patriotism ruled as Hitler advanced and the Japanese attacked, and it was the economic buildup for the war that finally changed attitudes and ended The Great Depression.

Granddaddy Hobart was right about the effects of the easy money. Both the value of money, and our work ethic have deteriorated. Had Granddaddy Oscar stuck a year’s pay from his mail carrier job in a mattress in 1930 and I found it now, it wouldn’t pay my cell phone bill. And if President Obama were to ask people to leave home and travel to the national parks to build roads and tunnels and plant trees or to the Midwest to harvest wheat and corn to earn minimum wage, sending most of the money back home, he would be met with stony silence and a request for more food stamps.

But our democratic republic is alive and well and awaiting positive and confident leadership focused on our strengths. It is a shame we need that, but FDR set the example and established the precedent, and we have never recovered from it, still always looking for the next savior. Whatever one thinks of FDR, we can all thank him for the 22nd Amendment to the constitution, passed by congress in 1947 and ratified by the necessary states in 1951, limiting presidents to two terms in office. I’d like to see similar limits on congressmen and senators, but, while they gladly put such a restriction on the office of president, I doubt they will ever subject themselves to the same discipline. They just started a fall vacation, in the third week in September, and won’t have to come back to Washington until after the November elections.

Of those nine members of the two families I mentioned in the first paragraph, only my mother, born 1/9/1921, and one slightly younger sister are surviving. I probably should let Mother read this before posting it but will share it with her later and seek forgiveness, if necessary, rather than permission.

This is not Granddaddy Oscar, nor is it his 1933 Chevrolet. I just thought the images might help younger folks think about what the USA was like in 1933. I wish I had such pictures of him, but photography was an expensive luxury in those days. 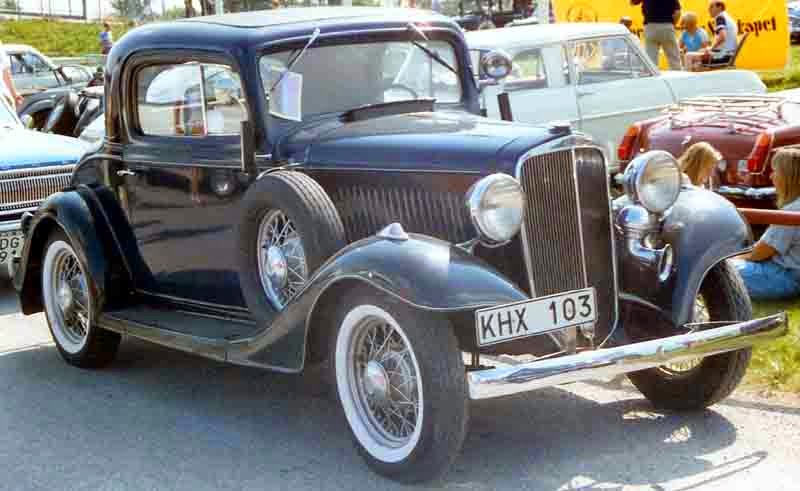