Posted in Politics, and Social Spending

The item below is from the August 1, 2016, Time Magazine. Search “universal Income” and you will find recent much longer articles from The New York Times, Fortune, Bloomberg, The Atlantic, New Yorker Magazine, Wall Street Journal, CNN, and a variety of liberal and conservative and even logical blogs. So, it must be a hot item for now. 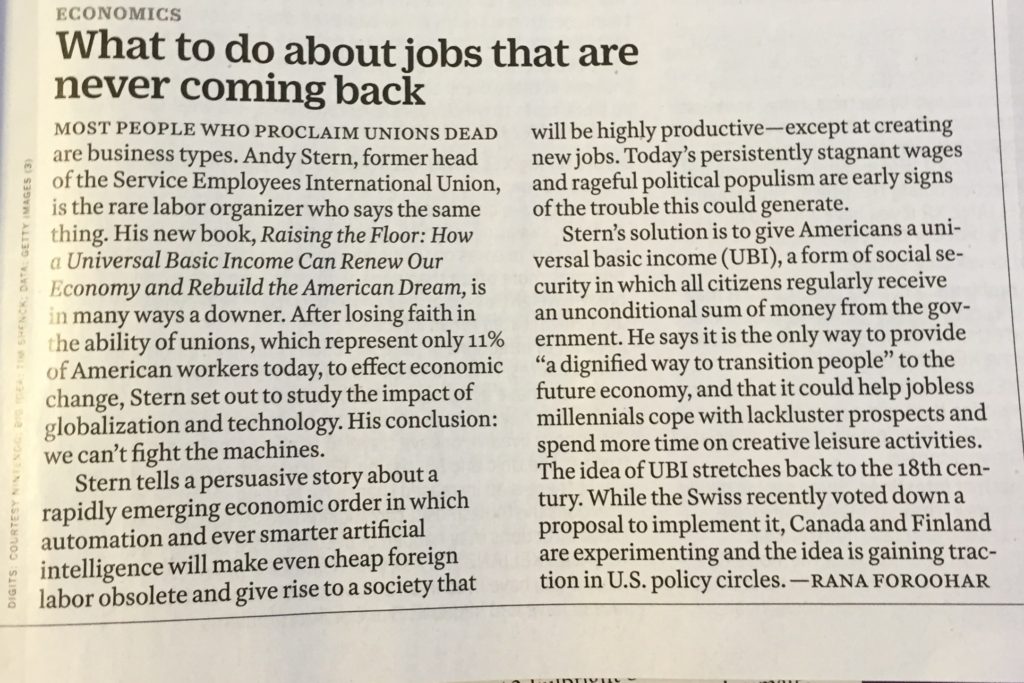 We have been talking about “Universal Health Care” for decades, and I have suggested, tongue in cheek of course, Universal Food Stamps and Universal Toilet Paper as possible additional opportunities to advance the Progressive Agenda. None of those ideas, however, seem acceptable to me because of complexity, high cost of administration, and associated limits on our constitutional guarantees of life, liberty, and pursuit of happiness.

But, Universal Basic Income (UBI) is elegantly simple and increases all our freedoms. Of course that would be true only if it replaced all the hundreds of other social benefits, including, but not limited to, Social Security, Medicare, Medicaid, Unemployment, Food Stamps, Section 8 Housing, Student Loans, and income tax exemptions, deductions, credits, and exclusions, currently offered in exchange for proof that we really need them. And it would be true only if the costs were fully paid to avoid the inflation and increasing inequality that would result from pumping additional borrowed money into the economy.

In its simplest form, the UBI would result in a payment of perhaps $1,000 a month to every adult citizen, currently about 240M persons. If my math hasn’t failed me, that is a total of $2.9T a year, not much different from our current level of total Government Social Benefits of $2.8T, and would result in much higher levels of actual cash benefits since there would be no significant overhead associated. And, it is only about 15% of GDP, so that doesn’t seem particularly onerous. Plus, it is completely fair and impartial, the same amount of money going to every citizen without regard to race, gender, national origin, sex, personal wealth, personal income, or political leanings.

Of course tax revenues would have to increase, and would have to be progressive, collecting higher percentages from those with higher incomes. But, the tax rates would be significantly lower and fairer without exclusions, exemptions, deductions, and credits. Tax Returns would be required only from the self-employed and from corporations, others just paying a fixed rate dependent on their incomes. We would no longer have to prove that we gave money to some charity or that we have a certain number of dependent children to get a reasonable tax bill.

Such a change would help rebuild the family structures that have been destroyed by federal social policy. A young couple with minimal education and energy and with $2000 a month of UBI could get married and establish a home and begin to work and learn skills and improve their situation instead of standing in lines applying for government assistance or having to prove to the government that they are not married or that the father is not providing any assistance.

Advanced education would be much more accessible with additional family income available as each child reaches 18 and begins receiving UBI. Living with parents and going to school would be affordable. The government would cease enslaving citizens with student loans.

Of course tens of millions would be receiving that UBI even though they wouldn’t really need it. I would expect a big increase in charitable donations and activities providing additional assistance to those in need even with the UBI. Recipients would not be able to claim, as we often do with Social Security, that it is our money and that we get to keep it and spend it however we like.

We would need to get the government out of the health care business except in setting up rules and regulations for reasonably priced, universally available, major medical insurance with no restrictions based on pre-existing conditions and no premium discrimination except for age. Everybody is going to have to come up with birth control pill and flu shot money out of their UBI’s.

There are a couple of downsides. Tens of thousands of government employees previously involved in testing our worthiness for government benefits and distributing the money based on their sometimes subjective judgments would find themselves out of work and depending on the UBI for a new start. And 435 Senators and Representatives would find themselves with time on their hands, no longer charged with picking winners and losers in the convoluted tax system with which we are currently burdened, gaining and losing votes and campaign contributions in return. Maybe they would have time to work on our infrastructure, national defense, and immigration systems and come up with occasional tax rate cuts since GDP growth in the new free environment would generate more than enough money to fund the government.

If you think the UBI as I have described it is a bad thing, don’t worry. Those two downsides are adequate to prevent it ever coming to pass. It is far more likely that we will get a UBI piled on top of all the current systems and driving us further into debt.

Oh, and just to show that I am willing to compromise, a system like the above giving UBI payments only to individuals age 18 to 64 and leaving Social Security and Medicare in place for those 65 and older would be a giant step forward from the mess we now have.

UBI has broad appeal to all parts of the political spectrum, socialists to libertarians. For more explanation, check out these articles.