Living in an Imperfect World

In a perfect world, there wouldn’t be any need for government spending on either national defense or social benefits. Nations would never threaten each other’s economies or borders, everyone would be educated and have sufficient job opportunities and motivation for supporting themselves and having something left over for others, and friends and family and private groups such as churches would take care of the unmet needs of their own. That is not the world we live in.

Because spending on defense and social benefits is primarily remedial or reactive in nature, we can get some feel for how well we are doing in those areas by looking at the spending trends. The more we are spending, the worse the situation. The long term trends on defense spending as a percent of GDP, over the past fifty years or so, are down mostly due to the end of the Cold War. There was a relatively small increase after 911, but spending has again declined as the USA has withdrawn ground troops from the Middle East and should continue to decline if and when revolutions in the Muslim countries result in democracy and openness to the rest of the world and Islamic fundamentalists lose their cachet.

Spending on social benefits, on the other hand, is relentlessly upward and has more than tripled as a percent of GDP since 1960. And, because the number living in poverty remains stubbornly in the 15% range, there is pressure for further increases. How can such a trend be reversed?  It has to be through improved education, a more dynamic economy, an emphasis on personal responsibility, and probably a lot of positive peer pressure. We have proven that money does not solve the problem.

Unfortunately, trends are in the opposite education, desperation leading to increasing talk about a guaranteed annual income for every single adult in the USA, whether needed or not. Switzerland just soundly defeated such a proposal, but, if it were brought to a vote, the USA might buy the idea no matter how much debt and inflation would result. 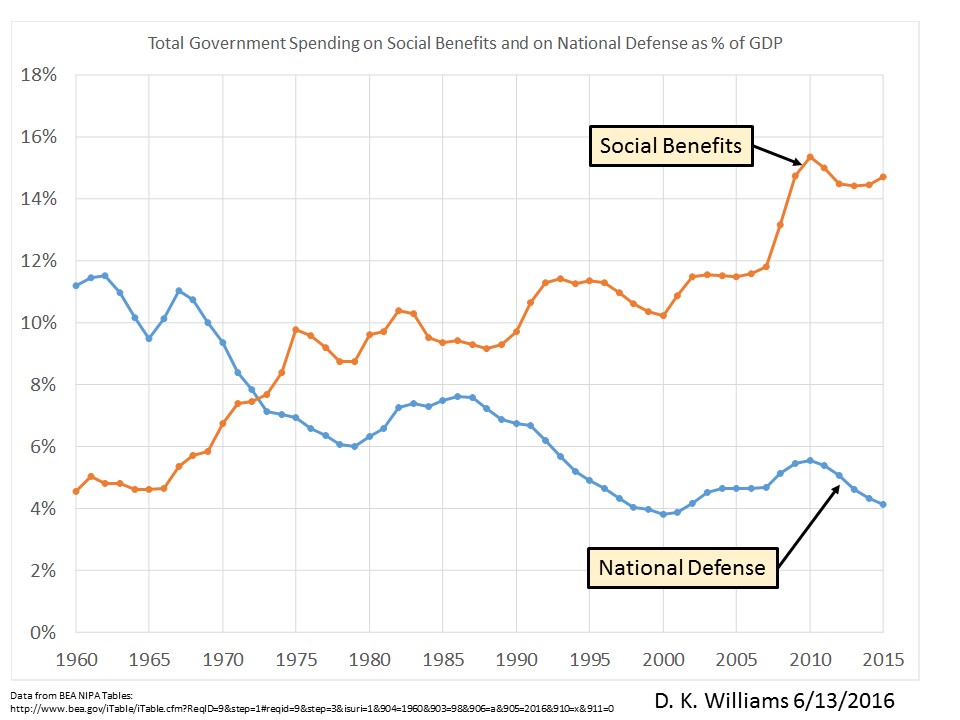 Some argue that we are in trouble on social benefits because of excessive spending on defense, but the chart should prove that cutting defense spending will not solve the problem. Defense spending may well be higher than it needs to be. I am sure that at least 10% or so could be identified as waste and cut without being missed except by the people and companies directly benefiting from it. Spending on military bands, for example, is currently under attack. But completely eliminating defense spending would not have offset the increase in government social benefits over the last 35 years.

Social benefits, on the other hand, are very popular, and, against a dwindling minority of objectors, there is continual pressure for increases. We spend more because of poverty, and the more spending there is, the poorer we become because increased dependence on social benefits means less investment in and support of the economy and less motivation to work and produce and contribute. The fact that we are bragging about a strong recovery even as we borrow to fund 15% of 2016 federal government spending proves the point.

So, I am guessing that the long term result of the current trends is that we become more peaceful and poorer, which sounds not so bad except that we will present an attractive option to someone or some organization or some country wanting to increase their own wealth or status by exploiting the people and relative riches of this great country. And that may well wipe out the freedom option we have offered so many millions over the past 200 plus years.

This world is good but is not and will not become a perfect world. Its improvement seems to me to be best served by a peaceful but supremely strong and prosperous United States of America. Vows of poverty, chastity, and obedience are good options for individuals seeking God but such a vow is not a good idea for a nation. Well, we could certainly stand significant moves in the directions of frugality and chastity, at least enough to get the debt back to a reasonable percent of GDP and significantly reduce the numbers of children with single moms living in poverty.

The defense issue reminded me of a picture I took in my front yard in the spring of 2011. I just stuck the caption on it. I’m sorry for the poor focus, but I was in a hurry to get it before the hawk, only fifteen feet or so away, took off. 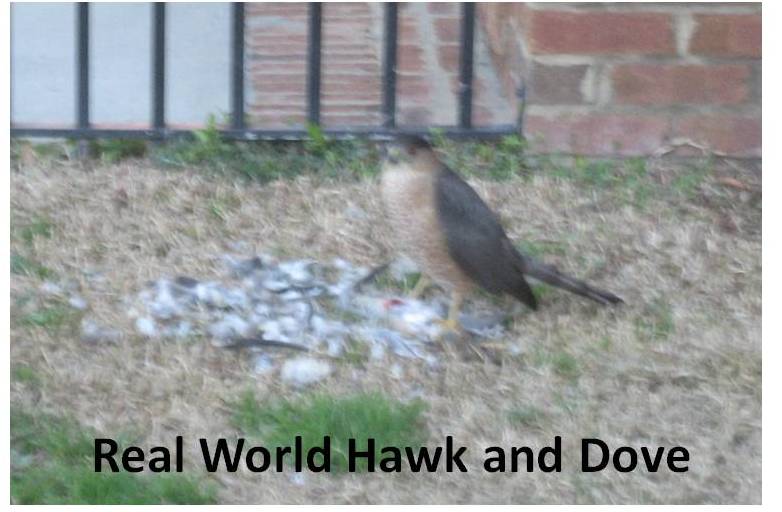 Chart data are directly from the Bureau of Economic Analysis National Income and Product Accounts Tables. You can find them here.