Adding Value, Making a Difference, Even if Homeless (Originally Posted 9/10/2011)

I’m about to get in trouble here, but let me try to minimize the trouble by emphasizing that this posting has nothing to do with the seriously mentally ill or seriously disabled homeless or with homeless parents struggling to keep their families together and find safe places for their children to sleep. Through our churches and other non-profits and various government programs, we should be taking care of such persons by providing dependable food, clothing, and shelter.

This post has to do with the tough ones, the capable ones, the independent ones, those who have learned to survive on the streets or camping in nearby wooded areas and who support themselves, at least partially, with handouts from sympathetic or threatened people they encounter on the streets. They may have minor disabilities or mental illnesses, a drug or alcohol problem, a criminal record, and may have completely alienated their families, but they are not helpless. Many have small incomes. I know something about them because I have talked with quite a few over the past several years.

I’m looking forward to seeing such a homeless person voluntarily walking the streets of Columbia with a broom and a large plastic garbage bag, sweeping and picking up litter, just trying to do whatever he or she can do, given the circumstances, to make the city streets, his or her home at least temporarily, a better place to live. I have a twenty dollar bill in my wallet for any homeless person I find exercising such civic responsibility.

The reality is quite different with such persons often generating litter and otherwise making conditions worse and the cities less attractive to visitors as indicated in this quote from a recent The Bay Citizen article about public toilets proposed for San Francisco.

There were nearly 10,000 documented “incidents of human waste” cleaned up last year in the Tenderloin alone, according to Dina Hilliard, executive director of the North of Market-Tenderloin Community Benefit District, a neighborhood improvement effort financed by local property owners that pays for sidewalk cleaning.Source: The Bay Citizen (http://s.tt/13a3n)

I’m all in favor of public toilets, and the older I get, the more I like them. But if there aren’t public restrooms and you gotta go, that is no justification for leaving a mess for somebody else to deal with. And the sidewalk cleaning service being paid to do the clean up is a good example of bad GDP.

San Francisco has a reputation of being very supportive of homeless people with the result that there are perhaps 6,000 or more there at any given time. (That puts the 10,000 documented incidents in perspective: Not so bad on a per-capita basis.) We drove through the Tenderloin District several years ago and saw very quickly that it was not a good place to park the car and get out for a city stroll.

But you would think that with so many homeless people there, supported by the city and the people of San Francisco, with time on their hands, the streets and sidewalks and even the storefronts would be spotless and tourists would be swarming in to see how the homeless appreciate the support they get from the community. I guess it is a lack of leadership. Or maybe a lack of work ethic.

And maybe a significant contributor to the problem is a low level of expectations of the homeless. We all know from personal experience that low expectations are destructive and demoralizing and that high expectations can be inspiring and enabling. We can help some of the homeless, I believe, by expecting more of them and making ways for them to meet those expectations. To do anything less is disrespectful and patronizing of them.

And, if you are an employer, keep your eyes open for that homeless person cleaning the streets and gathering litter. That person will make a good employee, assuming they pass the background check and the drug test. And they can use the $20 I’ll give them to buy bus tickets to get to work the first week.

And, if you are upset with my position on this issue, please go back and read the first two paragraphs again. 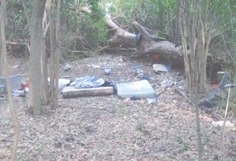 This is a picture I took of a Congaree River homeless camp at the east end of the Gervais St Bridge.

And thanks, by the way, to Catholic Charities of the Midlands for establishing Clean of Heart in downtown Columbia, SC, to enable the homeless to get showers and do their laundry on a regular basis. I fully expect them to take advantage of it, leave the shower and laundry areas spotless, show appreciation for the service, and voluntarily pass on the favor in some way. We can all help make the world a better place to live.