August 21, 2011, I wrote a post making some fun of Warren Buffett’s take on our federal deficits. It began with some quotes from Mr. Buffett’s 2011 interview with Charlie Rose:

“Well, I think — I think if we get back on more or less the formula we had which was getting 18.5 percent or 19 percent of our revenues from taxes, we can spend 21 percent then. We can run a deficit of a couple percent of GDP on average over time because our — our country will grow and we have a lot more debt capacity than we had back in 1790, just like I’ve got more paying capacity than I had 50 years ago.

So as your income grows, your population grows, your wealth grows you can handle more debt. But you can’t let it keep increasing as a percentage of your income or wealth and which is what we’ve been doing like — like crazy lately.

So I don’t mind a couple of percentage point gap; 18.5 percent or 19 percent on revenues, 21 on thereabouts on expenditure but that means we have to hit both sides. And we can’t put ourselves on a trajectory that takes the expenditure side up automatically as the years pass, which is what we’ve done with entitlements.”

(Note: I’m taking the liberty of assuming what Mr. Buffett really meant by his puzzling first sentence above was that we could get back to taking 18.5 to 19% of GDP as federal government revenue.)  Here is an illustration of Mr. Buffett’s targets in historical context. They look pretty aggressive in terms of deficit reduction, but are not good enough, even using his 19% rather than the lower 18.5% of GDP as revenue. As of 2015, revenues are pretty much on his target while expenditures are still 1.5% of GDP too high. Our actual average annual deficit of 3.7% of GDP is embarrassing and irresponsible. 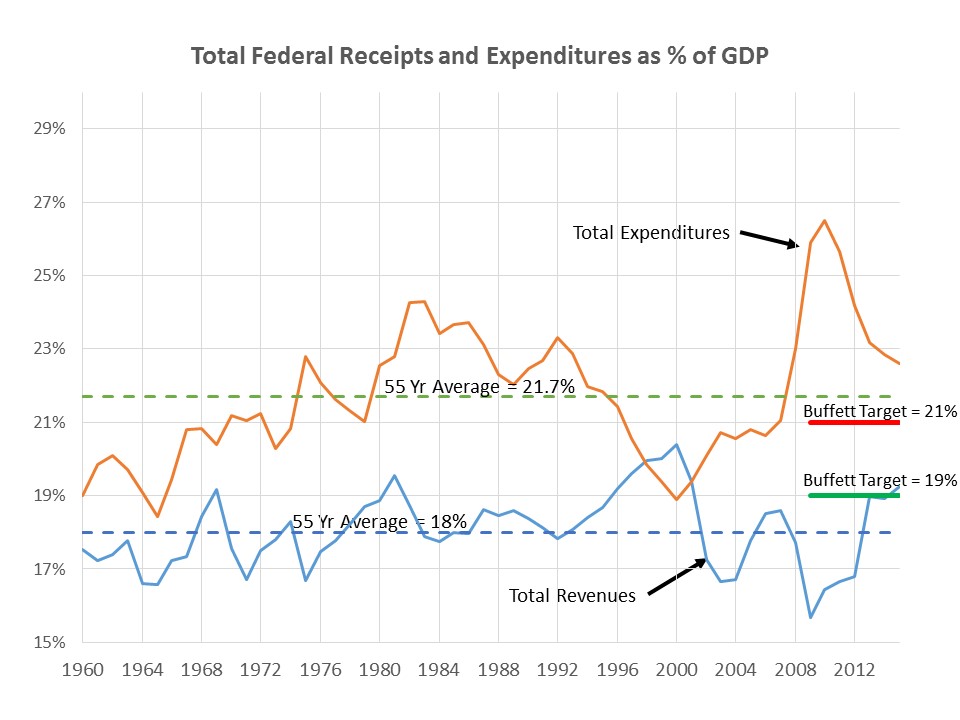 There are two important variables Mr. Buffett ignored, GDP growth rate and interest rate on the debt. Since we are always dealing in current dollars for both GDP and Debt, as well as revenues, expenditures, and interest payments, it does not matter, for the purposes of this calculation, how much of the annual increase in GDP is real and how much is inflation. So, here is an interesting chart showing a ten year moving average, to remove the noise, of annual percent change in nominal GDP. That is a dismal picture, especially since inflation is now running around 2% per year and real GDP growth well less than 2% per year for the past ten year average. 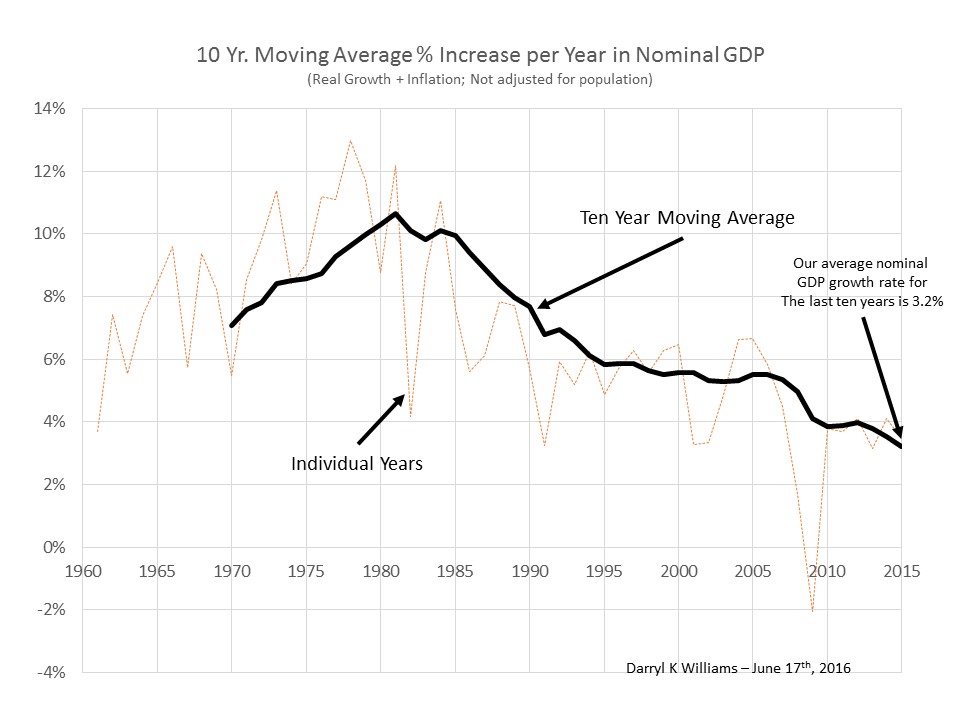 It seems pretty clear to that there is a fixed mathematical relationship between GDP, deficits, interest rates, and debt as a percent of GDP. It is pretty easy to set up a simple model showing the effect on accumulated debt as a percent of GDP with a range of inflation rates, nominal GDP growth rates, and interest rates on the debt. The example below is based on a constant deficit of 2% of GDP, interest on the debt of 6%, and five different nominal GDP growth rates, 2%, 4%, 6%, 8%, and 10%. What it shows is that the deficits are unsustainable and lead to disaster at growth rates less than 8%. And 8% GDP growth is no cake walk. 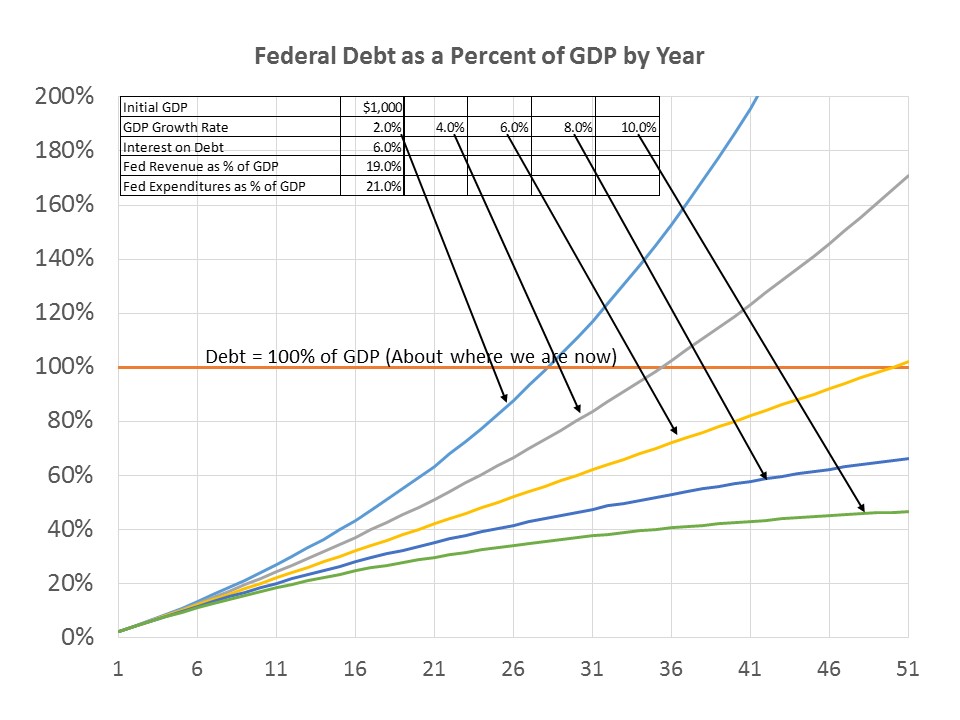 This second example is intended to show what we will have to do to recover from the over spending that already has our debt at about 100% of GDP. It is based on a frugal approach, deficits reduced to only 1% of GDP, and shows that, even with that austerity, GDP growth will have to be better than 6% to make any progress. Even at 10% GDP growth, recovery will require decades. 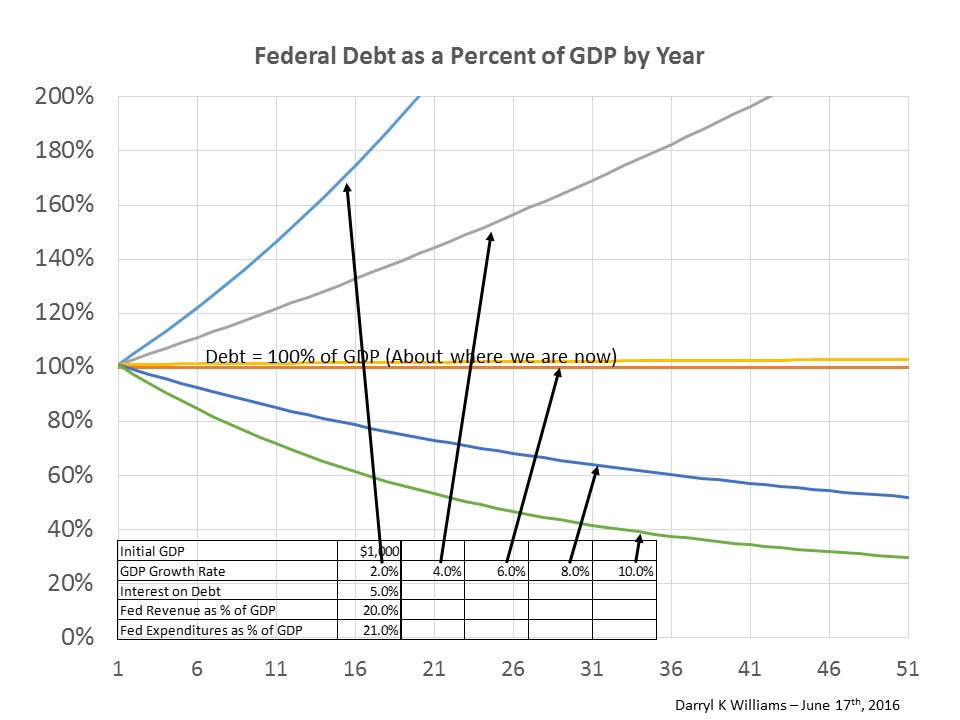 I understand that Mr. John Maynard Keynes, British economist of the last century, came up with the idea of deficit spending by government in order to stimulate the economy when things get sluggish and that that particular proposal became very popular because it was fun, made the people happy, and got the politicians re-elected. I’ve never studied Mr. Keynes but, if he was as smart as people say he was, he must have also pointed out the need for government to spend less than it takes in when times are good in order to pay down the debt accumulated during the bad times. Doing so would be good use of the old “saving for a rainy day” principle, would help keep interest rates low, and would possibly help prevent those irrational exuberance driven booms and bubbles which always seem to end badly. If he didn’t include that in his proposal, then I am not really interested in anything he said.

We missed a great opportunity during the George W. Bush administration to skip the infamous “Bush Tax Cuts” and instead pay down the debt, or at least avoid its rapid expansion, and possibly avoid or mitigate the housing bubble which ended in disaster in 2008. All we had to do was continue the surpluses generated under the leadership of Bill Clinton (D), Trent Lott (R), and Newt Gingrich (R). Cooperation of those three (and the tax revenue bonuses from the dot com boom and the spending drop due to the end of the Cold War) led to the only three years in recent history in which federal revenues exceeded federal spending.

In the quote at the beginning of this post, Mr. Buffett got pretty close to the truth in the second and third quotes above, but nobody listened and it is already five years later.

If you want to play around with the spreadsheets and figure out your own recommended strategy for avoiding the crisis, here are the files.